The attachment of the small protein, ubiquitin, to target proteins regulates a vast array of biological processes. We are interested in the role of ubiquitination in regulating transcription and the DNA damage response. We study the protein complexes that attach, recognize and remove ubiquitin modifications, as well as the way in which cross-talk between ubiquitination and other post-translational modifications regulates chromatin activity. We use x-ray crystallography, cryo-EM, enzymology, cell-based assays and a variety of biophysical tools to gain insights into the mechanisms underlying these essential cellular processes. Below is a summary of ongoing research projects:

The role of histone H2B ubiquitination in transcription and chromatin dynamics 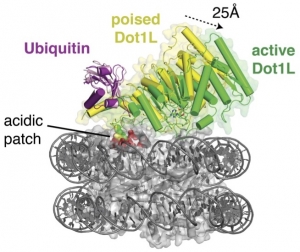 replication and the DNA damage response. H2B-Ub is a rapidly turned over histone mark that is found in actively transcribed regions. H2B-Ub plays a role in recruiting the histone chaperone, FACT, which mediates both disassembly and assembly of nucleosomes during transcription and DNA replication. Monoubiquitinated H2B also activates histone methyltransferases that methylate lysine residues in histone H3 at K4 and K79, which are marks of actively transcribed genes. We are interested in the mechanism by which the attachment of ubiquitin to histone H2B promotes transcription activation. 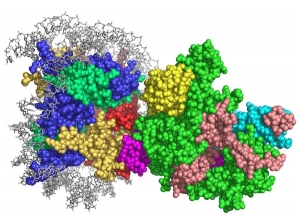 The 1.9 MDa yeast SAGA complex has been a paradigm for understanding the connection between histone modifications and gene activation as well as the cross-talk between different types of modifications. SAGA functions in a cascade of posttranslational modifications that begins with monoubiquitination of histone H2B-K123m which triggers methylation of histone H3-K4. The SAGA complex is recruited, where it deubiquitinates H2B, recognizes the H3K4 trimethyl mark and acetylates histone H3. The 19 SAGA subunits are conserved from yeast to humans and are organized into subcomplexes including the four-protein SAGA deubiquitinating module (DUBm) and the four-protein SAGA histone acetyltransferase (HAT) module. Our structural and biochemical studies are aimed at uncovering how SAGA recognizes its nucleosomal substrates and how the multiple histone modifying activities of SAGA are coordinated during the process of gene activation. 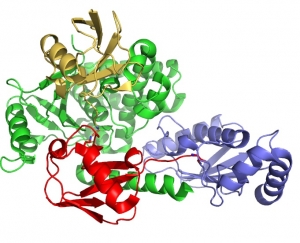 Attachment of ubiquitin or the ubiquitin-like protein, SUMO, plays a critical role in the response to DNA damage. Monoubiquitin, K63-linked polyubiquitin, K48-linked polyubiquitin and mixed SUMO-ubiquitin chains play distinct roles in signaling DNA damage and recruiting the necessary enzymes needed for DNA repair. We study the enzymes that specifically assemble and disassemble ubiquitin signals at damage sites, as well as the proteins that recognize different types of chains as distinct signals.